Today Facebook (hereby abbreviated as just FB) announced their “Reactions” system so people can express more emotions on a FB post then the simplistic “Like”. As always when FB makes changes that people can see and needs to get used to there will be global headlines and everyone will say it’s either the best thing ever or threaten to leave FB. I don’t really care that much about icons for people “to express love, laughter, surprise, sadness or anger” and feel quite apathetic towards it.

I have been a FB user since 2007 and have really mixed feelings about the social network. I post very seldom but I check it daily to see what’s going on in my friends life just by scrolling in my feed for a couple of minutes. One problem is that it’s usually the same people that keeps posting and most often it is things that really don’t concern me or themselves directly. Like someone posting a political statement regarding the housing situation in Stockholm or someone else that really need to tell the world how good a certain soccer player in Spain was tonight or yet someone else post a picture of a cute cat (not the posting persons cat, mind you).

But one thing I find really bad on FB is the comment system. I find linear comment fields to be a thing of the past and I don’t understand how people can sit down and read the comments of a post that 100+ people have bothered to comment. I can only assume that no-one actually reads everything that has been said previously and starts writing his or her opinion which of course floods the comments and lowers the experience for everybody else. One really good change that was made some time ago (months?) was nested commenting so some flame wars could be made on “side tracks” but it is still to linear for my taste to be able to filter out the useful things from the crap. I think the only way to go is to have something similar to slashdot where comments get points and the crappy ones are filtered out thus only showing comments that are somewhat useful. Of course people would scream bloody murder if a comment system as technically complex as slashdot’s was forced upon the FB population since it’s non-trivial to actually understand how it actually works. A more lightweight system that doesn’t need things as moderators, meta-moderators and karma would be something similar as the stackexchange sites uses (I often read stuff at stackoverflow — it’s brilliant for programming issues!), but that might be better suited for “simple” question/answer posts. 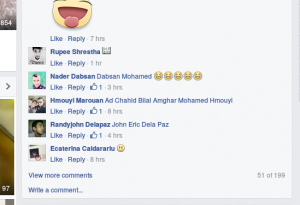 Comments with the sole purpose of notifying someone else about the post. FB should really have some functionality to slap these users and tell them to use the “Share” functionalty and send the post as a private message. Really. I don’t even think it would be that hard to implement.

Another thing that bugs me is not really caused by the users but rather a weird behaviour when some post shows up in my feed because a friend has commented on it. 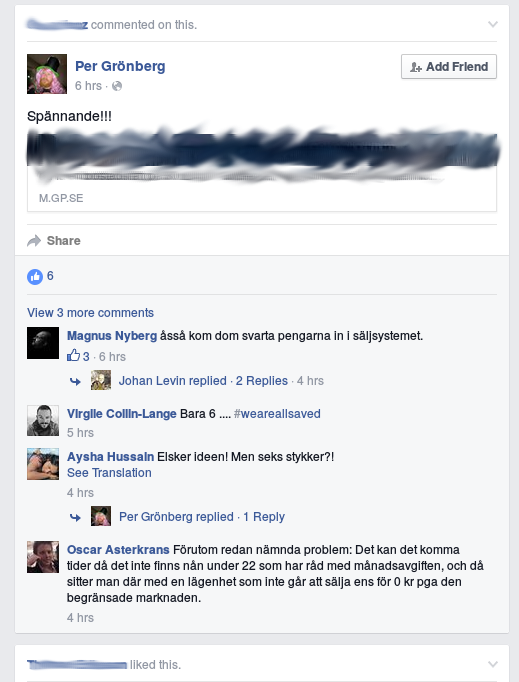 So my friend posted a comment, but in the abbreviated comment field I can’t see the actual comment by my friend. This is just a waste of my time. In this example there was just three more comments but sometimes I would need to browse through hundreds of them to find what my friend said and probably a few more written earlier to understand the context. There should be some kind of shortcut to get me to the comment that FB actually has notified me about. I am also confused about why it is the latest comments that gets shown to me as I would personally prefer the first comments. There might be a setting somewhere…

And don’t get me started on the total abuse of hashtags… I would just like to say this: Dear Facebook users. If you never search for posts using hashtags make sure you don’t pollute your post with them. They have a purpose, just not the one you think.